An expat who fails to return within the validity of exit reentry (خرج ولم یعد) visa will face a ban period of 3 years to get a new visa in Saudi Arabia. In other words, there is a 3-year ban for moving without a final exit visa from Saudi Arabia.

3-year ban for moving without exit

As per Decision No. 825 issued in the year 1395 (the equivalent of Gregorian 1975), expatriates who “violate” their contract would be fined SR 10,000 and banned for 3 years from re-entering Saudi Arabia. 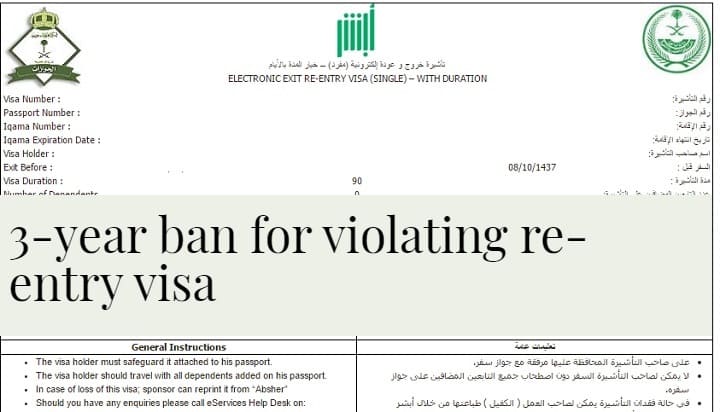 The 3-year ban for moving without final exit from Saudi Arabia is not applicable to expats holding dependent Iqama in Saudi Arabia. You can always apply for a permanent family visa or a family visit visa for them.

Can we convert exit re-entry visa to final exit?

Unfortunately, there is no way to convert an exit re-entry visa to a final exit visa to avoid the ban while the employee is outside Saudi Arabia.

However, in the case of dependents, the family head can contact Jawazat and cancel the Iqama for dependents and later apply for the permanent family visa again as the exit reentry visa ban is not applicable to dependents.

Can we enter Saudi Arabia on a new type of visa?

Can we go to other GCC countries?

There is no problem in going to other GCC countries on a work visa. Although a GCC Wide Ban has been proposed for expatriates, it is not yet implemented.

How to extend exit re-entry visa for dependents?

How to print exit re-entry visa from Absher?

How to cancel exit re entry visa in KSA?