Home Travelling from KSA Airlines Experiences Does Human Waste get ejected from the plane in the air?

Unless and until you have flown in a private jet, or first class, the toilets on board the aircraft are generally windowless, relentlessly cramped up and reeks of the cheap sanitizers, however, they have come a long way since the introduction of air travel.

One can safely say that in such cramped up and claustrophobic environment, one would basically concentrate on surviving while doing their business. Furthermore, most people with a heightened fear of enclosed spaces may not be able to do their business at all in these bathrooms. Recommended: What happens when you don’t switch off your mobile phone during the flight?

When we use the lavatory onboard the aircraft, we never stop to wonder where the waste material goes off to. As it is we are intrigued by the waterless black commodes. There had been several theories to what happens to the waste material once we flush the toilet onboard. 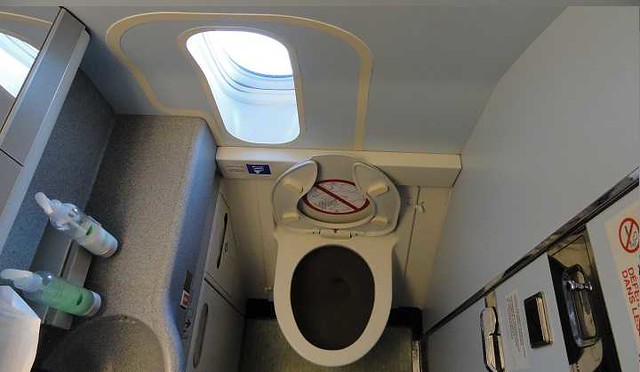 We must ask what does happen to all that waste, I am sure there is no use for it in the aeronautical field. We may find ourselves asking whether it is jettisoned or ejected into the sky allowing it to free-fall back to earth.

To all of those who hold it in, so that they can eject their waste over a certain area, you shall be sorely disappointed. Pilot Patrick Smith has stated that there is no possible way to eject the contents of the lavatories or the waste material out of the plane while in the air.  Recommended: Why do Airplanes have round windows?

When the flight has finally ended, blue fluid along with whatever contribution has been made by the passengers of the plane are then transferred into another tank which is attached to the back of a truck. Some may say that the co-pilot has an equally lousy job as the truck driver who drives the waste truck, but it pays better to be a co-pilot.

One man from California had won a lawsuit

One man from California had won a lawsuit after a few pieces of what seemed like Human Waste had fallen from an airplane and it came crashing down right through the skylight of the gentleman’s sailboat.

There was a leak which extended from the exterior nozzle fitting of the toilet. This cause the runoff to freeze, build up and then drop like what would seem as a neon-colored ice bomb. Think that is bad? A 727 has once suffered engine separation after it had ingested a frozen chunk of the leaked toilet waste.