International media has been claiming that the Israel Prime Minister Benjamin Netanyahu visited Saudi Arabia on 23rd Nov to meet the Crown Prince Mohammed bin Salman and the US Secretary of State Mike Pompeo.

In this regard, Saudi Arabia’s foreign minister has broken the silence and declared that no Israeli officials were present during the meeting. 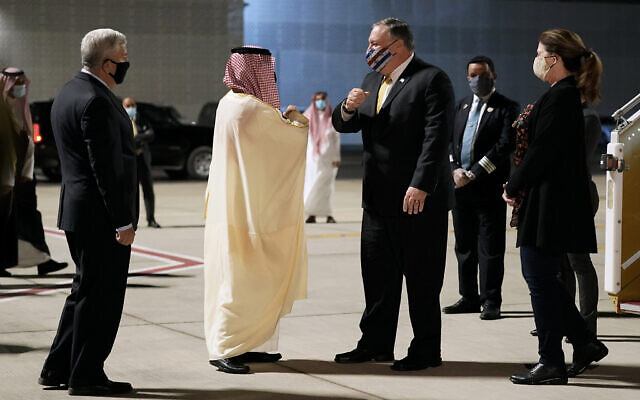 Clarifying about the attendants of the meeting, the Foreign Minister said that there were Saudis, Pompeo and John Abizaid; the US ambassador to the Kingdom, in the meeting. Pompeo and Crown Prince met at NEOM, a northern city, on Sunday under his regional tour of the Kingdom.

I have seen press reports about a purported meeting between HRH the Crown Prince and Israeli officials during the recent visit by @SecPompeo. No such meeting occurred. The only officials present were American and Saudi.

The Recent agreements of Israel with the UAE, Bahrain, and Sudan have led people to speculate that other Arab countries would follow suit.

Saudi Arabia has already made it clear that they will not accept Israel until a fair deal is signed between Palestine and Israel up to the satisfaction of the Palestinian people.

#Berlin | FM Prince @FaisalbinFarhan: The Kingdom of #SaudiArabia remains committed to peace as a strategic option based on the Arab Peace Plan and relevent int’l resolutions enabling the Palestenian people to establish their own state with East Jerusalem as its capital pic.twitter.com/xYIk46gVo1

“When we sponsored the Arab Peace Plan in 2002, we fully envisioned that there would eventually be relations between all Arab states, including Saudi Arabia, and Israel if the condition is met”