The Saudi Arabian Monetary Authority (SAMA) has clearly declared that all those involved in decorating bouquets of flowers with Saudi currency notes shall face legal action. They will face penal action similar to penalties for counterfeiters.

The Special Penal Code on Counterfeiting has made it clear that those involved in such illegal activity shall be penalized over it. This is not the first time that Saudi currency notes have been used for decoration purposes. Some years ago, a Saudi artist made a dress with SR 500 currency notes and auctioned it for SR 1 million.

The law states that those who deliberately change features of currency notes which is being used in the Kingdom, or damages, changes, tears or washes with a chemical, alters weight and size or partially damaged by any other means, shall be imprisoned for three to five years and face a fine that is no less than SR3,000. The maximum fine imposed shall be SR10,000: with and without penalties. 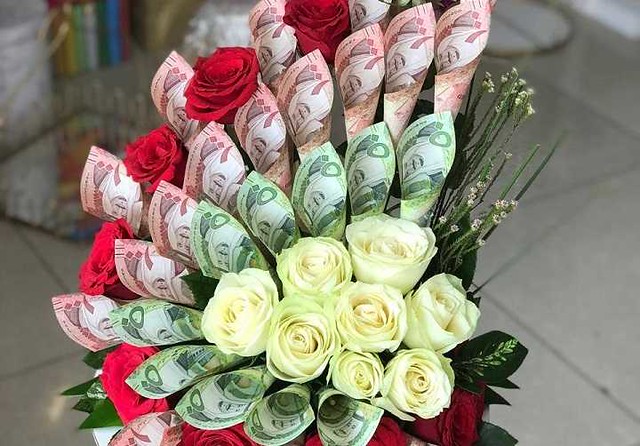 The case surfaced when many people approached the bank with damaged notes claiming that they were placed in a bouquet. The bank had to replace the notes however now the central bank has directed the Council of Saudi Chambers to ask the bouquet dealers not to use chemicals so that the notes are not damaged.

SAMA pointed out that the general impression about banknotes is changed after they are used in the bouquet with chemicals. Our currency notes are something that shall be respected. It is a national symbol that needs to be preserved. They shall be used accordingly: they shall be used for the purpose they are created for. Recommended: What are different Landmarks on Saudi Currency Notes?

SAMA in past has also issued a letter to the Ministry of Commerce and Investment, asking them to stop the use of images and designs of circulating currencies commercial uses without consent of SAMA. They can use the design and patterns only after obtaining a license from SAMA.

Some of the products were being sold having pictures of the official currency in markets of KSA. This is illegal and punishable as stated by the penal law to prevent counterfeiting.

What to do if a friend does not return money in Saudi Arabia?