Home Social Issues Saudi Culture Bisha’h: How to detect a liar by licking a hot metal?

System of licking a hot metal

Bisha’h is one of the ancient lie-detecting techniques where a large metal spoon, rod, or ladle is heated and then stuck to the suspect’s tongue. This technique is still being used in some tribal areas of Egypt. 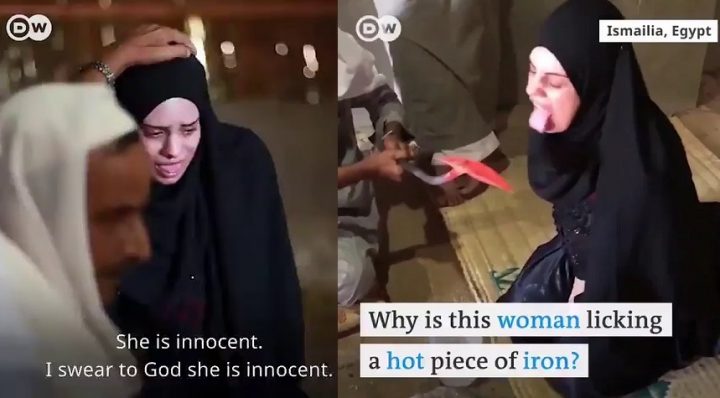 It is a belief that those who are guilty have dry mouths due to their nervousness. While those who are innocent have saliva in their mouth. The hot spoon when touching a dry tongue gives blisters while when touching the wet one does not harm the person being trailed.

Though outlawed, this inhumane procedure still serves as a compelling legal act among this Egyptian Bedouin tribe.

“Bisha’h,” the tribal trial is usually conducted when the parties involved are unable to bring forth evidence or reliable witnesses.

The trail is conducted in the presence of the tribal dignitary known as the “mubasha’” or the “executor of the bisha’h.”

The verdict of bisha’h is the final one and its discussion cannot be challenged/appealed.

Reportedly, the practice of bisha’h ended in Saudi Arabia in 1980 when the last “mubasha’” passed away. As he did not leave behind a successor, the ritual died with him.

Grand Mufti Sheikh Sahwki Allam said that this practice is illegal and has nothing to do with Islam. It tends to hurt the one who is innocent and is not a reliable technique.