The Lost Paradise of the Dilmun water park

Many people claimed that the incident took place in a resort known as “The Lost Paradise of the Dilmun water park” but the site is yet not confirmed. In the video, you can see a group of men gathered around two women in the pool.

They were trying to get out of the pool

The two women can be seen trying to get out of the pool while the men are touching them inappropriately at private places and grabbing them by their swimsuits. This video went viral and shocked the people of the Arab world.

It also led Arab and Bahraini people to call upon the authorities and take legal action on this case. However, as usual, there were some people present to blame the two women for wearing an inappropriate and provocative swimming outfit that invited the men to harass them.

While some people stood up with the two victims claiming that they were just enjoying their day out at the beach where they were subjected to the terrifying assault. Some people also slammed those who were making excuses for the harassers.

However, this was not enough when people were busy blaming the victim or the harasser, the Bahraini Police warned the two women not to repeat such actions anywhere and at any time again. We have not heard of any other action taken against those who were harassing the two women. 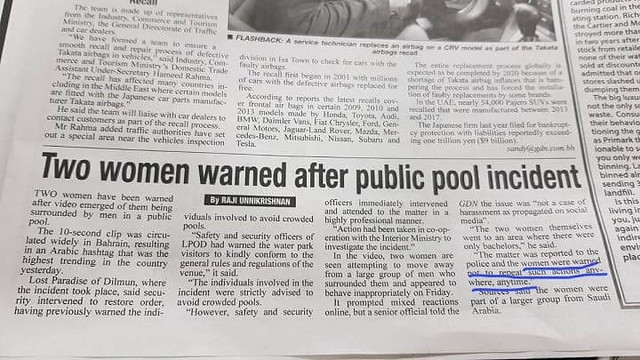