Sheikh Ali Ahmed al-Mullah was appointed as the Muezzin of Masjid al-Haram in 1975,  around 46 years ago.

The family of Muezzins

Ali Al-Mulla of the holy mosque was born in 1945 in Makkah a family of muezzins of the grand mosque. He started offering Adhan at the Holy Mosque when he was 14 in the absence of his maternal uncle Abdul Hafeez Khoja, his paternal uncle Abdul Rahman Mulla, and his grandfather who all were also notable muezzin at Masjid al-Haram.

He became the official muezzin in 1975 after the death of his uncles’ son Sheikh Abdul Malak al-Mulla.

As we all know the first Muezzin of Islam was Bilal ibn Rabah رضي الله عنه. He was the Muezzin at the time of our beloved Prophet Mohammad ﷺ.

Muezzin Ali Ahmad Mulla is also nicknamed as Bilal of the grand mosque of Makkah for following Bilal رضي الله عنه footsteps. He is called Bilal for his beautiful voice and fascinating stories and different tales he relates during his preaching.

Ali Ahmad Mullah is also known as the longest-serving muezzin of the Masjid al-Haram. He is widely respected by the Muslim world and his Adhan is enjoyed throughout the world via radio, live television broadcast and other forms of media.

Ali said he witnessed the incident of 1979 when prayers at the grand mosque were halted for 23 days.

He said that blockade was lifted after 23 days and the first Adhan he performed at that time was during Maghreb prayer in the presence of King Khaled bin Abdul Aziz. 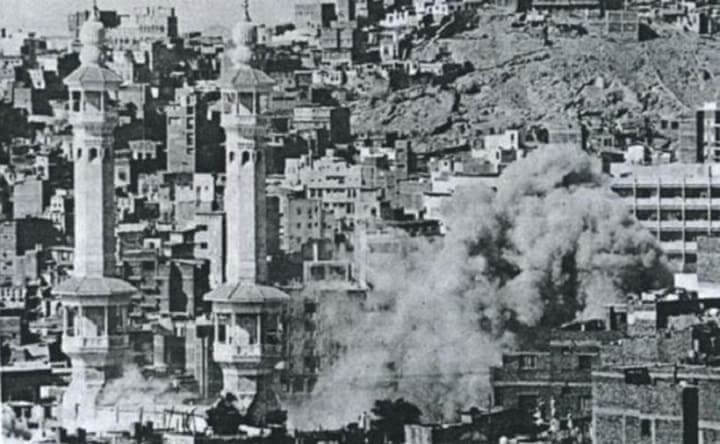 The old way of Adhan in Masjid al-Haram

It was the time when muezzin stood at each of the seven minarets of the mosque to call for prayer. At that time the time to perform Adhan decision was given by the chief of the Muezzins from Al Shafie Maqam, a place near the well of Zamzam.

The Adhan was given and each of the muezzins repeated the Adhan behind the first muezzin until the Adhan was completed. This was an old tradition that was introduced by the Ottomans and is still carried out in Turkey.