Umm-Abdullah wears hijab and mostly travel by train in England.  She was traveling on the train as her routine. There were few people who were staring at her and she ignored them as per her daily thing.

Some people were curious, some might be feeling sorry for her or some of them didn’t like her dressing or really hated her.

However, among those, there was one woman who was sitting opposite to her. She easily noticed that she was looking at her continuously. Every time she would give her response with a smile and then she would quickly change her angle of vision.

Anyhow, this continued to go on throughout her whole journey and then she tried to make some effort. Umm-Abdullah was thinking that the woman who was staring at her might come near to her and stop her. But as soon as the train stopped, the woman just picked up her bag and stood up.

She was given a folded note

She was actually surprised when the woman gave her a folded note into her hands. For a few seconds, she was completely blank and was thinking about whether to open it or not.

Some panic thoughts clicked her mind as to maybe she was threatening her to stop using hijab or maybe just chewed a piece of gum folded to tease her.

In the meantime, she just opened the note and was surprised to read the enchanting and heartwarming note which consisted of 15 words.

“You look beautiful in your veil (hijab) as same as the full moon in the night sky” – Alice. 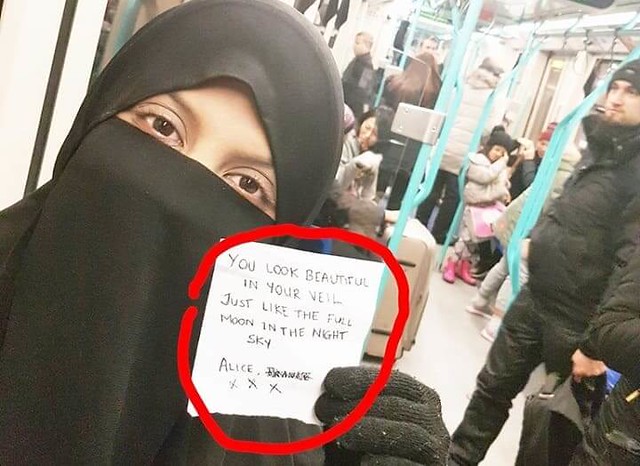