Home Latest News Islamic News A piece of Kiswa (the cover of Holy Kaaba) for SR 8...

The Holy Kaaba is located in the Grand Holy mosque of Makkah and is covered with black silk and cotton cloth with gold and silver embroidery. Recently an ad representing to sell a piece of cloth of Kiswa was posted on some website where a broker was asking to sell it for SR 8 million.

He claimed that it came from Kiswa. Though the broker did not disclose his identity and the seller’s identity but said that it was old and belonged to Al Sheebi. Al Sheebi is a family who is looking after the Kaaba since pre-Islam.

The Holy Prophet PBUH handed the Kaaba key to Al-Sheebi family and handed them the duty to look after the Holy Kaaba. He (PBUH) said, no one has the right to take away this duty from them.

According to the rule of the Al-Sheebi family, the eldest member of the family has the right to keep and safeguard the key. The broker said the piece of cloth (Kiswa) was authentic and the man had an official license from the emirates of Makkah to sell it. 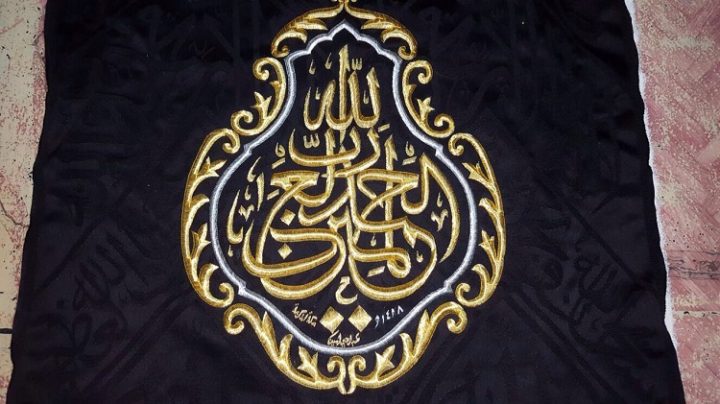 On the other side, a senior caretaker of the Holy Kaaba Abdul Malik Al Sheebi denied all the claims and said that his family members did not own any piece of the Kiswa. Many people use his family name to gain the trust and confidence of their customers and claim that they have an authentic piece of Kiswa.

He said all the pieces of clothes that people put out for sale are often imitations of Kiswa that are made in India or Egypt. The original Kiswa belongs to the state and is preserved in special warehouses.

This news wildly spread and Sultan Al Dossari, who is a spokesperson for the Emirate of Makkah, said they did not grant any licenses or permits to sell any part of the Kiswa.

It was reported that the advertisement that offered to sell Kiswa for SR8 million was posted on a website with a given number but the man who responded to that call claimed that he was hired as a broker by an important person to sell multiple artifacts and then the advertisement was deleted.

The manager of the Kiswa factory in Makkah, Mohammad Bajauda said every year the Kaaba is adorned with new Kiswa and their factory is to produce a new Kiswa. The old Kiswa is handed over to the knowledgeable committee for storing.

He said every year we see a rise in a number of ads that offer to sell old Kiswa to artifact collectors but the unfortunate reality is that they are only Imitations of Kiswa and these copies could be found mainly in Egypt, Turkey, Britain, and France.

Bajuda said 210 people work in the factory for eight long months to produce the Kiswa every year and before the Kiswa Factory was opened in 1927, the Kiswa was made in Egypt and its materials were bought from Sudan, India, Egypt, and Iraq.

But nowadays the 658-square-meter covering of the Kaaba is made of 670 kg of high-quality silk that is mainly imported from Italy and Switzerland and 120 kg of pure gold and silver.