Home Latest News Islamic News A cleaner in Makkah who is said to be a millionaire –...

For the past couple of days, a photo of a cleaner in Makkah has been revolving around with this great story that he is a millionaire who has come from India. A man who resides in Makkah went to offer his Salah in Masjid al-Haram.

This cleaner is said to be a millionaire-story

After he was done with his prayers, he went to a cleaner and offered him a few riyals. Yet to his surprise, the cleaner did not accept the sadqa money as he was a millionaire.

He even showed the man his valet which was overflowing with a bunch of bank cards. The man was in deep shock why was this millionaire cleaning the floors of Masjid then.

Upon investigation, the cleaner revealed that he is an Indian and owns a chain of hotels in India. Allah Almighty has blessed him with a lot of money and wealth and thereby he wishes to be a noble servant of Allah. 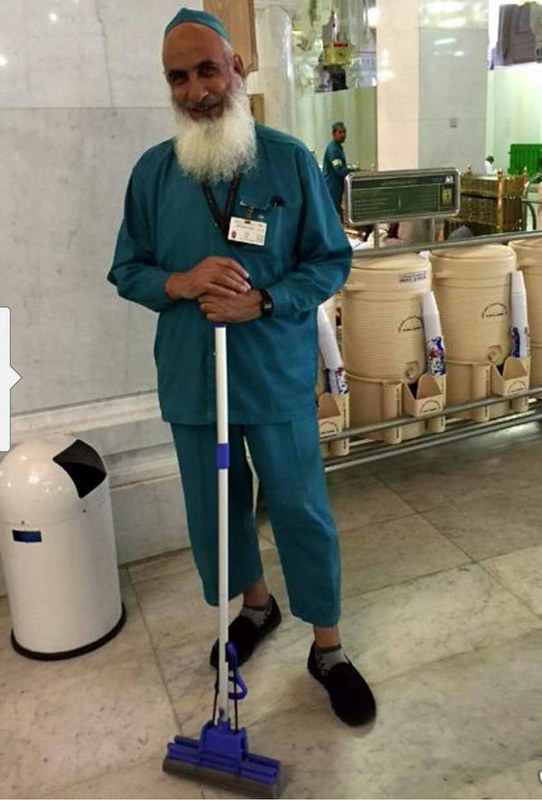 Why does he work as a cleaner?

When the man inquired from the nearby cleaners about the very cleaner they also assured that he is a millionaire who comes only to seek Allah’s happiness.

The story quite touched my heart and I saw that people around social media had been acknowledging the cleaner’s humbleness.

Is it a true story?

To my surprise, it wasn’t true at all. A YouTube video I found filmed the very cleaner who disclosed that he is not a millionaire.

The very cleaner said in an interview that his name is Muhammad Aslam and he has been providing services to Masjid al-Haram as a cleaner for 25 years! He is surprised to learn the false story regarding him!

He might not be a millionaire, yet he has won the hearts of Million across the world over his services! We hope and pray for his happiness.

Before I end, I must say we shall not share posts that are unauthentic. I wish the writer of the false story learned that such things have a serious impact. People might stop giving charity to him! We might deem him a wealthy person, yet he is not!