1-Account Number: It is the reference number for all bills issued by the company to each customer. It is the consumer number which is on every bill. All financial developments related to the consumer are listed in it. Examples are bill issuance, settlements, payments, connection fees, and meter insurance amount.

The customer’s account number enables easy access to info about any charges (to/from him), early payment amount, the estimated rate of the monthly consumption, bills’ past account, cutting off connection notices, the number of actual disconnections, and the source of other information about the customer or his meter. 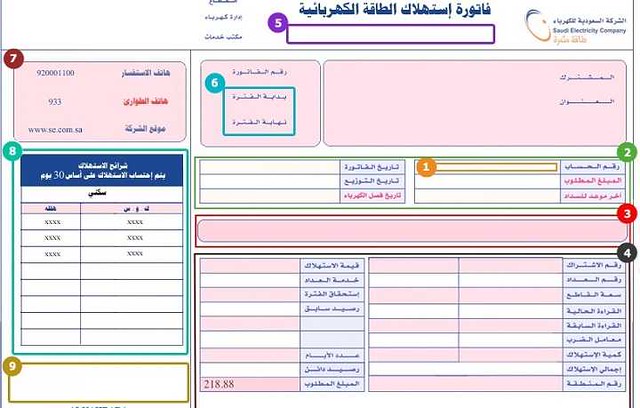 2-Unpaid Amount: It is the amount payable for the charge of electric energy consumption, service fee for the meter, and the prior unpaid balance (if any) which must be paid by the consumer.

Electricity Disconnection Date: In case the customer fails to pay the bill with by the due date then the electricity service provider may disconnect the service partially till the date the amount is paid.

3-Disconnection Notice: A notice of the disconnection of the electricity facilities data is served to the Customer due to failure to pay the bill

4-Breaker Capacity: It is the durability and energy of the switch that handles the power load connected to the consumer’s meter. The purpose of this switch or button is that it automatically disconnects the power or current when the load goes above the permitted limit available for the consumer or at the time of failure or breakdowns it protects the grid and system of the company and also the customer.

Coefficient: It is a number of measures used for the totaling the amount of power used by the customer. The coefficient is mostly for the meters that are with power transformers. The formula used for the calculation of the consumption is: (Present reading – Previous reading) x Multiplier.

Consumption Quantity: It is the definite amount of electricity used measured in KWh (kilowatt hour)

Total Consumption: This one shows the total quantity of consumer’s electric energy usage for one meter or more than one meter.

Consumption charges or rate (Amount): This column of the bill shows the unpaid amount in Saudi Riyal estimated by a formula. The formula is to multiply each section of the tariff in coins (Halalah) by the total of used electric energy in kilowatt in hours as shown in the picture.

Meter service: According to the resolution of the Council of Ministers, the company charges appropriate fixed costs for the reading and repairs of the meter and billing precisely for each and every particular breaker capacity fitted in the property of the subscriber.

Current Cycle Dues: It is the value to be paid for the usage of the current period added to the meter service (meter charges) charges.

Previous Balance: This column shows the amount which is remained unpaid on the part of the customer from the previous bill until the issuance date of the new bill.

5-Awareness messages: Awareness information and guiding principle are related to customers of Saudi Electricity Company as shown in the picture

7-Inquiry Telephone: It is an auditory inquiry system. The audio system is in both languages Arabic and English. You can inquire about services and also send a request for this and about electricity bills

Emergency Telephone: It is 24/7 available helpline. It handles calls and inquiries related to power breaks due to unpaid bills, cutting off connections, and connecting again the electric current according to subscriber’s demand. In case of receiving reports or complaints from the common public about power failure, power meters and electrical equipment burned out, and handles these requests. In case of fire breaks out the Civil Defense Directorate is needed.

8-Consumption Rate: Consumption charges are listed in different classes and each classification has a different tariff amount. As shown in the picture. You can establish from here that the bill you are paying is domestic or commercial.

9-Additional Bill Details: Detailed information for the electrical facility is available in this particular column