Heritage Site in Al Kharj: As we know Saudi-Arabia is rich in Islamic heritage and its history reflects Islamic civilization, icons, and culture. On 21st of September, 2011, the Saudi Commission for Tourism & National Heritage with French counterpart and archaeological experts signed an agreement to conduct an archaeological excavations mission.

This mission consisted of 18 members in whom the French team was led by Dr. Jeremy Chitikat and Saudi team by Abdul Aziz Al Hammad. Archaeological excavations mission was conducted in Al Kharj city of Saudi-Arabia, located in the center of the Kingdom under Al Kharj Governorate. This city lies around 80 km south of the capital of Saudi Arabia “Riyadh”.

1400 Years old Large Mosque: The excavation mission did great discovery and highlighted important historical Islamic stories. The mission of this archaeological excavation is doing work in multiple places in the area, called Al-Yamamah.

This Mission has successfully discovered a large mosque which dates back to the early Islamic civilization, expressing the era from the first century to the fifth century AH. 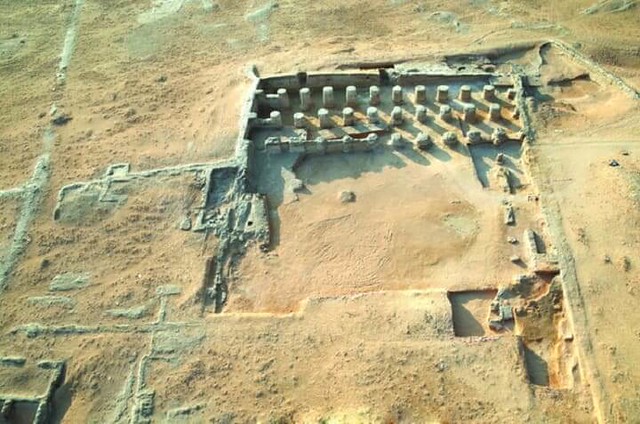 One of the Biggest Mosque of that time: This Holy Mosque is considered as one of the biggest mosques in the Arabian foreland at the time, after the two Holy Mosques.

One of the newspapers reported about this mission and stated that this mission’s investigation also included the Al Bina, and five other Islamic sites scattered in many areas which were located in Riyadh and Wadi al Dawasir, Asharq Al-Awsat.

The experts and archaeological investigation work resulted in the finding of a number of places which also lead this period to the Stone Age. This is the first time in Saudi history that these historical places have been discovered in the city of Al-Kharj.

100,000 years old place: The era of these discovered places was about 100,000 years old.  There are many old broken remains of that era found. There were remains of glass beads and bracelets in yellow, blue and red colored clay. Green glass items and broken clay remains were also found in the area.

There were small plates which looked like from the era of Abbasid or the period before the spread of Islam in the 5th century AH.  Remains of human habitation were also reported at Ain Al-Dale’a, which is situated towards the western side of the city of Al-Kharj. It was considered that It dated back to about 5,000 years ago.

2200 Years old Sword: An uncovered sword made of bronze having the size of 56-centimeter and iron of the 1st century BC was also discovered. At King Saudi University, the professor of archaeology and heritage as well as chairman of the Saudi team, Dr. Abdul Aziz Al-Ghazi, during the first season of the mission’s work stated that the mission is the first of its type in the Middle East with respect to the number of specialists, their qualifications, and the contributions to heritage research and excavation.

Prince Sultan bin Salman who is chairman of the Saudi Council for Tourism and National Heritage also expressed his gratitude for the excavation work.

The excavation work is run and under control with the command of the guardian of the Two Holy Mosques King Salman. This promoted good tourism and served as a source of knowledge for their citizens about Islamic history in the Kingdom.