‘Maqam’ is Arabic word which means, a place or point where the two feet of an individual is situated while standing. Maqam e Ibrahim is the venturing stone used by Prophet Ibrahim (Peace be upon Him) throughout the development of the Kaaba.

During the construction of the upper level of the Kaaba, Prophet Ibrahim (Peace be upon Him) stood upon an extensive stone piece which was moved along with him as each area was finished.

When the Kaaba was constructed, the extensive stone piece was left outside the Kaaba, near to the eastern divider. It turned into known as the Maqam-e-Ibrahim (the station about Ibrahim). Recommended: 13 Sights of Holy Kaaba you should know about 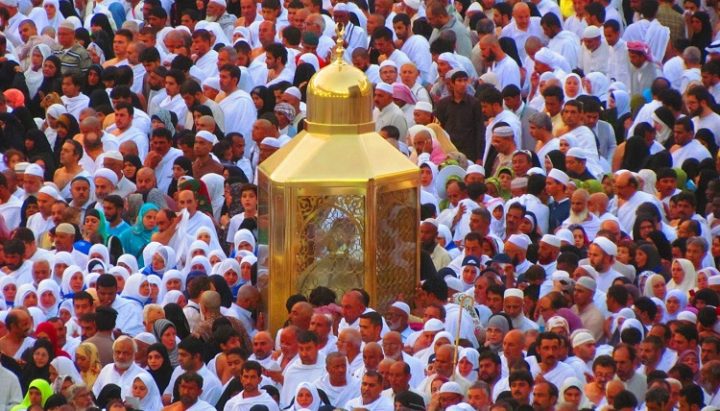 1-The height of Maqam-e-Ibrahim is 20 centimeters; depth of one footprint is 10 centimeters and second is 9 centimeters.

2-Today, the Maqam-e-Ibrahim is found in front of the entryway of the Kaaba.

3-One of the amazing facts was that the stone he stood upon while constructing the Kaaba, was transformed into a soft and delicate piece into which his feet sank so that one can perceive the impressions of His feet on that rock. And after many hundred years, footprints are there on stone located at the eastern side of Kaaba.

4-The place it stands today is the spot where Prophet Ibrahim (Peace make upon Him) offered two raka’t prayers after the completion of construction of Holy Kaaba to Allah. Thus, its significance is that when the seventh round of the Tawaf is finished, two raka’t of prayers are offered at this spot.

5-During Hazrat Umar bin Al-Khattab’s (R.A) reign, he shifted the place and moved the Maqam more towards the east, so that the individuals who try to perform Tawaaf are able to perform it conveniently, without being in the way for individuals who pray after completing their Tawaaf next to Maqam-e-Ibrahim.

6-Allah commanded Muslims to pray next to Maqam-e-Ibrahim. The following are verses from the Holy Qur'an pertaining to Maqam e Ibrahim And [mention] when We made the House a place of return for the people and [a place of] security.

And take, [O believers], from the standing place of Abraham a place of prayer. And We charged Abraham and Ishmael, [saying], “Purify My House for those who perform Tawaf and those who are staying [there] for worship and those who bow and prostrate [in prayer].” (Al-Baqra 2:125)”

7-This stone was sent from the heaven to Prophet Ibrahim along with 2 more stones. One being Hajr-e-Aswad, and the second is the stone of children of Israel.

8-Maqam of Prophet Ibrahim (P.B.U.H) has remained safe and protected even after so many years. The continuation and protection of this stone throughout history against solid enemies is a standout among Allah’s miracles.

9-Shaykh Ibn ‘Uthaymeen said that undoubtedly, the glass enclosure of the Maqam-e-Ibrahim is proven with respect but the engraved pattern doesn’t seem to be the actual footprints as historically it vanished a long time back. This is only as a marker to denote where Ibrahim (P.B.U.H) stood.

Sahabi Rasool S.A.W died after killing a snake who was a Jinn