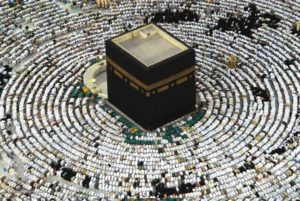 The Kaaba which is the epicenter of Makkah is the most celebrated place on earth and especially for Muslims. Every day thousands of people circle around the holy Kaaba which is at the center of the Haram, there are millions of homes that have pictures of Kaaba on their walls and making them look beautiful. Billions of people face it five times a day to pray to Allah. This beautiful black cubed shaped design has many facts that many are not aware of and here are just a few.[irp]

Constructed many times: It was rebuilt by Prophet Ibrahim A.S. and Prophet Ismail A.S. is not the same as we see now. It went through many changes. The actual major construction took place during the time of Prophet (PBUH) before he became a Prophet. At the initial stage of construction Prophet (PBUH) prevented a major bloodshed by suggesting that the stone could be placed on a cloth so it could be lifted by every tribe. The last major construction was in 1996 which replaced many stones and made the foundation stronger.

Two doors and a Window: The Kaaba initially had a door for entering and for exiting. It also had a window on one side as well. At present, there is only one door.

It was multicolored: We all were under the impression that the Kaaba was always black whereas it was not black initially. The tradition was started by Abbasids whose favorite household color was black. Before it was finalized on black, the colors were Green, red and white as well.

The keys are with one Family: Prophet Mohammad was given the key of Kaaba at the time when Makkah was conquered, but he instead he gave it back to Osman ibn Talha. They were of Bani Shaiba family. They had always been the traditional keeper of the key and Prophet confirmed they will still perform their roles well.

It was open to everyone: Initially, Kaaba was open to everyone, anyone could enter and pray but since the number of pilgrimages increased rapidly so they had to close it and open it only for guests and dignitaries. It is now opened only twice a year.

One could swim in it: The problem that is faced is that since Makkah is in the center so when it rains it tends to get flooded. There were no sewerage and water control system. Like the usual, it rained so much that the Muslims had to swim to perform their Tawaf. Recommended: Man who performed Tawaf swimming around the Kaaba, Died!

The inside contains commemorative inscription honor the rulers who renovated it: For many years, there were only a few people who had visited it from inside but there was a man who once went inside and made a video of it from inside and it went Viral. The core of the Kaaba is now lined with marble and a green cloth covering the upper walls. Fixed into the walls are tablet each commemorating the refurbishment or rebuilding of the House of Allah by the ruler of the day.

The Black Stone is broken: A lot of people wonder why the black stone is in silver casing. It is believed that there was an Ismaili group from Bahrain who said that this Tawaf was an act of superstition. They also killed hundreds and thousands of people who came to perform Hajj and dumped their body in the ZamZam. Recommended: 7 Unknown Facts about Hajr-e-Aswad (The Black Stone) every Muslim should know

Not a Cube shape: Do you know the original design of Holy Kaaba was a rectangle?