Saudi Justice: We know that Saudi courts are fair, unbiased, and treat a culprit as a culprit irrespective of his/her background. Another such precedent was set by the Saudi courts on the 18th of October 2016.

Saudi Prince Turki Bin Saud Bin Turki Bin Saud Al Kabeer was executed for killing a normal Saudi citizen. Just a few hours before his execution did many heart-melting things which can be treated as a lesson for all of us.

1- A few hours before his execution, he was allowed to meet his family. He spent around 4 hours with them and you don’t need special powers to imagine what would have happened there. He was departed with heavy hearts after that.

He must have asked for forgiveness for whatever wrong he has done with each and every one of them. The Imam of Al Safa mosque said that the family and the prince were crying throughout their meeting.

“The family was called in to bid the prince goodbye and during the time spent together, you could see only tears and hear only expressions and sighs of sadness.

2- Saudi Prince then offered prayers and kept on reciting the Holy Quran until dawn. Once again, you don’t need a super imaginary mind to imagine his prayers. He must be asking for Allah’s forgiveness for what he has done. He performed Fajar prayer there.

3- At around 7 am, the warden took him to the police where his last will was written. He was not able to write himself. I don’t have any idea why he could not write himself.

4- At around 11 am, the family of the victim who was shot dead by the Saudi Prince arrived at the designated area of execution. Saudi Prince made ablution as he was getting ready for the execution.

5- Senior members of the Saudi Prince tried to intervene and talked to the family members of the victim to pardon their son/brother and accept blood money as a last attempt before execution but they denied it. 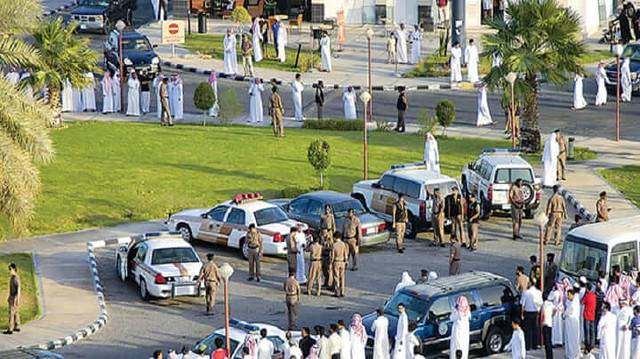 6-Saudi prince prayed Duhr and Asr and execution was carried on just after Asr prayer at 4:13 pm. The father of the victim was expressionless at the time of execution. However, the family of the Saudi prince kept on crying heavily on the execution of their son.