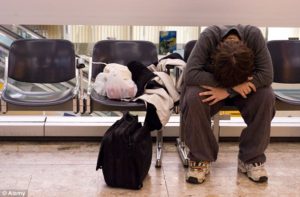 Kingdom of Saudi Arabia is a country which gives rights to people and state authorities try their best to facilitate the public. I got a personal experience in this regard when my flight got delayed at the airport of the Holy Madinah. I was waiting for my flight to Qassim along with other passengers at the lounge of Madinah airport. Suddenly an announcement was made by the airline representative that the flight is delayed and will not depart on the given time. The announcer did not mention expected time for the departure of the flight. While waiting for the flight departure I eventually started surfing the web page of “General Authority for Civil Aviation (GACA)”, I intended to know about the rights of passengers whose flight is delayed. To my surprise, there was a lot to be given as the remedy of a flight delay. GACA regulations explained different compensations for the passengers according to the time duration of flight’s delay. I mention them as follows:[irp]

1-If the passenger is there at the airport and flight is being delayed, the airline is bound to give special care to the passenger and the passenger is also entitled to soft drinks and snacks as well, after one hour of delay in departure of the flight.

2-The airlines are bound to arrange hot meals for the passengers after a delay of three hours in the flight’s departure.

3-If in case the delay in flight departure occurs for a duration exceeding six hours, the passengers waiting for the flight shall be given hot meals, they shall be provided with accommodation and airline is also bound to pay a financial compensation of 300 Saudi riyals per hour however the compensation shall not exceed an amount of 3000 SR in total.

4-If an airline postpones the flight and passenger is informed about this delay seven day before the time of flight’s departure, the passenger is entitled to get the amount of ticket to be given back without any deduction and if the airlines inform about the delay earlier than seven days than the passengers have two options; they may get the ticket refunded or they may ask for a confirm seat on some other flight departing on the same date or within a time of a day or two.

After I had read the above-mentioned remedies, I explained these to all other passengers that got affected by the delay of flight and I had a wish that all of them may contact the airline and demand the rights given them by law. I myself, after a delay of an hour, approached the officials of concerned airline and quoted them rights of passengers in case their flight is delayed. The airline’s representative contacted the higher authorities of airline and they also responded positively (because they were aware of the fact that passengers are well informed about their rights). Within 15 minutes all the passengers received snacks and shortly an alternative flight to Qassim was also arranged by the airline.[irp]

This incident clarifies that majority of passengers were not aware of their rights. Private and public sector organizations very often explain the duties of their customers and punishments for breaking the terms and conditions. Unfortunately, no one is interested in educating the customers about the rights given them by law of land. I feel the dire need of a campaign to educate the people and enhance awareness about different rights of consumers.