Men holding multiple marriages, or the simple concept of Polygamy is not something that we are not aware of. However, have you heard of a man marrying two or more sisters?  This is insane yet true!

In India, this is one of the new trends where sisters are given in the hand of the same man who tends to keep them in the same house and have children with all of them.

Recently, the Hindu community observed the Karwa Chauth where the Hindu married females keep a fast for the longevity of their husbands. They see their husband through a sieve after sighting a moon and then break the fast. 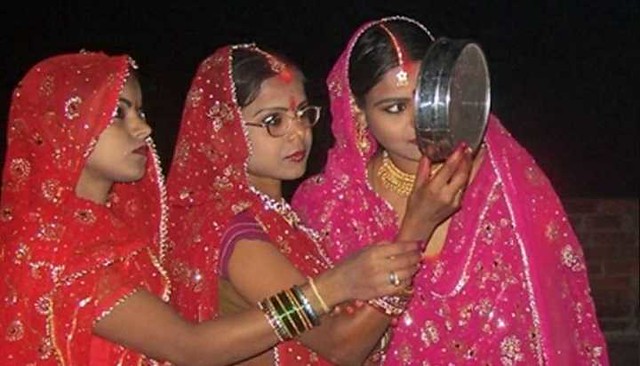 The man named Krishna is married to three blood sisters named Shoba, Reena, and Pinki. For 12 years they are living in the same house. The three observed the fast and completed all the rituals for the longevity of their single husband.

It is also important to mention here that Islam prohibits Muslims from marrying two blood sisters.

Not the first time in India

The story of uncommon marriages in India is not something new. Recently, we have shared a story of an 18-years old girl who married a dog. 70 people were invited to the wedding which included family members. Lunch was served to them; all marriage rituals were conducted. Watch the video.

In another post, we shared a story of Rajo Verma who is married to 5 real brothers together. She sleeps with a different brother every night. She has no idea which man the father of her toddler son is. Watch her interview.

We have also shared a post about the Baghpat region of India where the United Nations has also warned as women are required to marry multiple men from the same family to satisfy physical needs.