In Pakistan, we have seen multiple cases were the self-perceived criminals were caught by locals and were given severe punishment. Soon others would join them and eventually the person was tortured and beaten to death.

People thought that he was a thief

Last week, a 15-years old boy, whose looks spell out that he was not more than a street boy, was killed by a group of people. His crime: he entered a house, the men “thought” he had intentions of theft, he wasn’t given a chance to speak and was beaten till death!

It was written on his shirt “Apna Time Aye Ga!” 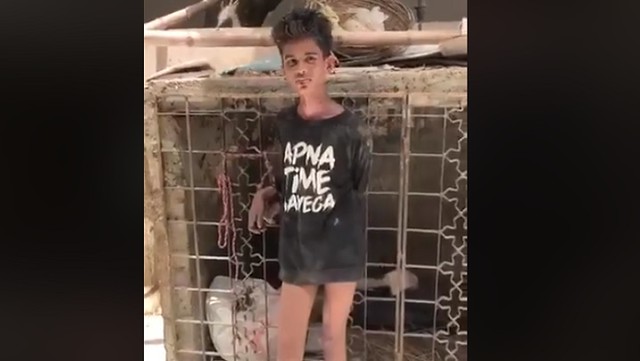 Rehan, a skinny, tan, streaked hair boy, who seemed as if carefree and would have enjoyed more time on the streets was wearing this tee-shirt whose words break me down: “my time will come”. The boy was wearing a black tee-shirt with print: Apna Time Aye Ga! (translation: my time will come). His time never came, and he died, died because humanity failed to save him.

He was caught and killed in the Kokan Colony, Bahadurabad, Karachi. It has been reported by multiple news channels that he was with another boy who escaped. Poor Rehan was caught by two men who thought Rehan had entered their house with the intention of theft.

He was dragged to the roof, tied up in a cage which looked like a cage used for birds. He was beaten badly; his jeans were taken off and his screams and words were never given importance.

minutes before death …#JUSTICE for Rehan …

Nobody came for his rescue

Yes, he screamed, screamed out of pain, screamed for mercy, screamed for help. Yet, all useless. People did hear him, they came and joined the men in beating. He felt unconscious yet beating never stopped. It has been reported that he had been beaten up by a mob of 30-35 people. In a video, circulating on the internet, one can also see an elderly man lynching him!

Rehan, a 15-year-old, was tortured with iron rods and wooden sticks. He died, died out of torture and injuries. He died at 1:30 pm and was taken to the hospital at 3:30. God knows if his dead body had also been beaten!  According to the medical report, Rehan died due to a head injury “due to torture by a hard and blunt object.”

His father has lodged an FIR

His father, Mohammad Zaheer, has lodged an FIR against the mob killing of his son in daylight. His family is in grief and demands the formation of a Joint Investigation Team to seek justice for the 15 years old boy!

Five suspects: Anas, Shahrukh, Masood, Daniyal and Zubair, have been arrested so far. We seek justice for Rehan, we don’t others to die before their time comes!