Some English words in the vocabulary and daily use have been actually derived from the Arabic language. So, next time whenever you are having coffee, candy or just using a mattress or sofa, keep in mind that all these words are derived from Arabic! Here are just some of the words.

01-Lemon: لىمون līmūn, is another Arabic word also known as a lemon. in the mid-medieval era. The Arabs introduced to grow crops of lemons, limes, and bitter oranges Mediterranean land.

In the end of 12th century, Arabs Ibn al-‘Awwam famous for ten kinds of citrus fruits cultivated in Andalusia and the spelling of the word is lemon as اللامون al-lāmūn 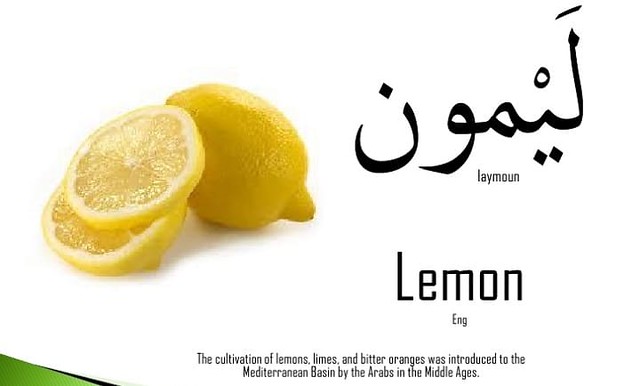 02-Sugar: سكّر sukkar is mainly the word sugar. The word is eventually from the Sanskrit language. The term used in Sanskrit is sharkara which means “sugar”. The Latin term sucrum or the French word sucre equal to “sugar” formed the new chemistry terms sucrose and sucrase. 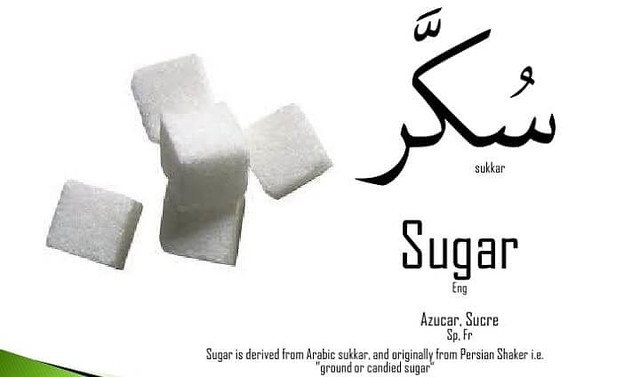 03-Cotton: قطن qutn | qutun means cotton. In medieval Arabic, this was the word used for cotton generally. In the mid of 12th century, the word went into the Roman language and then entered to English in the 13th century.

Cotton was not very common in the Roman-speaking lands until imports from the Arabic-speaking population were at lesser prices in the later medieval period. 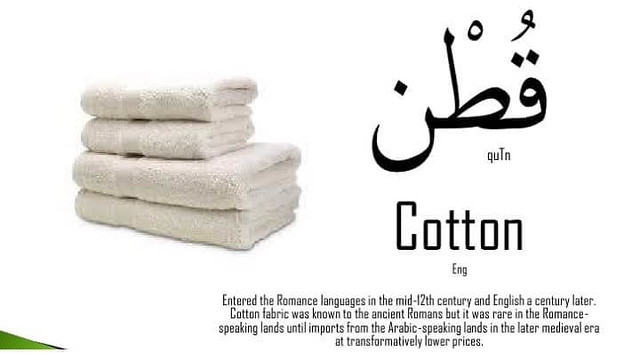 In the 17th century, the word magazine was started using in a publishing sense in the English language. It means a collection of material and information related to military or finding directions topics. 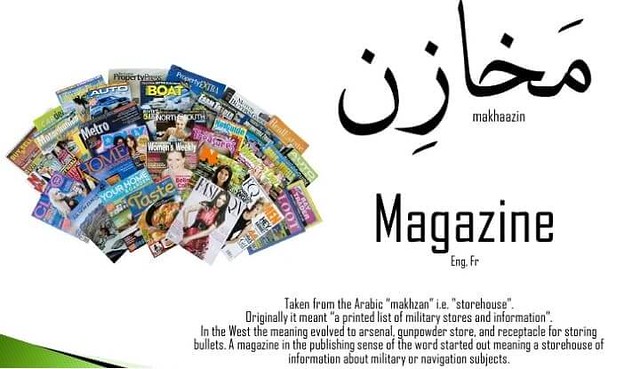 05-Average: عوار ʿawār is an Arabic word which means a defect, or something imperfect or damaged, including slightly damaged goods. English adopted this word because of the sea merchants. In the time of 18th century, those sea merchants used to call some of them on board display items as ‘avaria’.

From there it was adopted by British businessmen who visited here for their business. They used this word to describe their damages as being spread across their whole assets and find out a standard share. 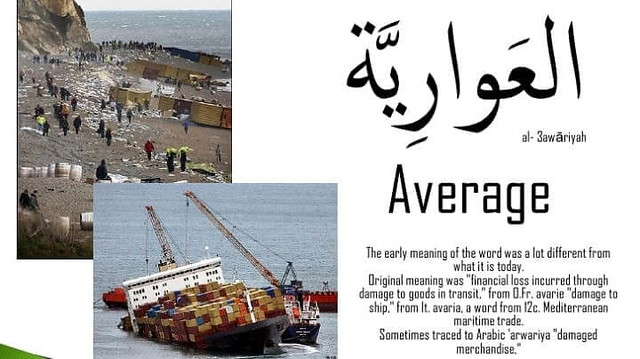 06-Candy: قند qand + قندي qandī is another Arabic word which means sugared. In ancient times in India, the word Cane sugar was developed. The word used in middle age Persian qand is a synonym to “cane sugar”. It usually believed to be derived from language Sanskrit.

The old-fashioned Arabs cultivated the plant with the unnatural process of irrigation and traded some of the product and exported them to Latin. In the later medieval centuries, the word candy introduced to all the Western European languages because of this trade business. 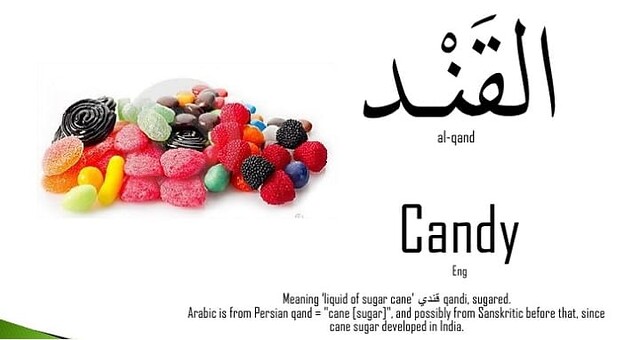 07-Coffee/ Café: قهوة qahwa is known as coffee. In the 15th century, drinking Coffee has its roots in Yemen.the word qahwa have been derived from Arabic to the Turkish language where it is known as kahve and then went on to become Italian caffè.

In the 17th century, the Italian term caffè became the part of most Western languages. Several historic records of the western languages have been shown that the word actually directly taken such as cahoa in 1610, cahue in 1615, cowha in 1619. 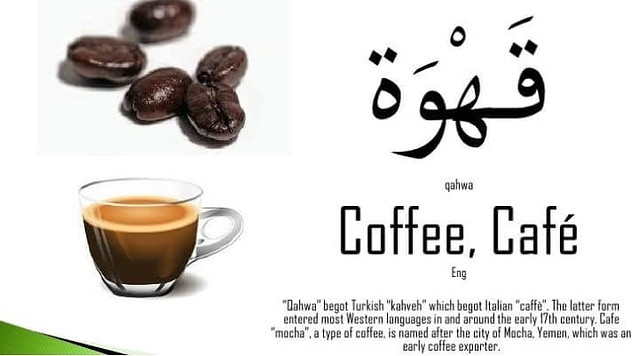 08-Jar: جرّة jarra, is a straight vessel made of clay. In 1418 and 1421 According to early records in English it is used as a container for olive oil. Arabic word jarra was used in earlier centuries.

Comparatively historical Arabic, early English, and Spanish language the classic jar word had vast in meaning than the typical jar in English now a day.

09-Spinach: The word has a vast history from إِسبناخ isbinākh in Spanish Arabic, and إِسفاناخ isfānākh generally in middle age Arabic, from Persian aspanākh. The word spinach makes known to Spain by the Arabs, from where it gradually reached to the rest of Europe. in the year 1400, the word first record in the English language.

10-Tuna: التنّ al-tunn is tunafish. The standard origin report is: Ancient Greek and classical Latin thunnus equal to “tunafish” which drove into medieval Arabic as the term al-tunn (or al-tūn) then entered into medieval Spanish as atún and finally went to everyday spoken American Spanish language as tuna.

Then the word had derived from American Spanish to California tuna in the 19th century. At last, the word tuna has reached international English language.

11-Zero: صفر sifr, called as zero. The Hindu-Arabic numeral system originated the use of zero as the basic digit. Medieval Arabic sifr passed on to Latin to become zephirum which equals “zero” then the term Old Italian zefiro.

Before 1485, it was shrunk into zero in Old Italian then the word became French zéro in 1485 and then eventually the English zero originated in 1604. 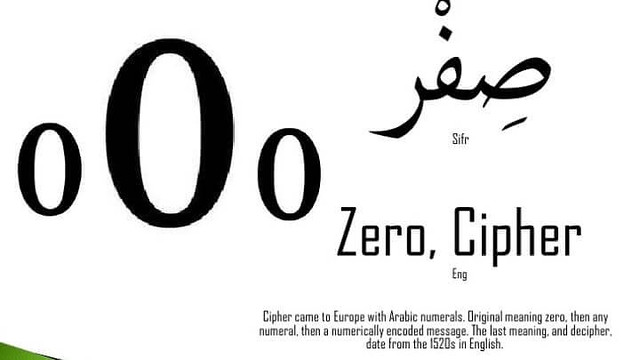 12-Mattress: مطرح matrah is a big size cushion or rug for resting on. In Arabic, the sense emerged out of the term “something is thrown down” from Arabic origin tarah which means “to throw”.

In the 14th century it derived to French and English languages. Usually, the mattress word meant a fill out under a blanket at that time in Europe or “a sheet to lie upon”. 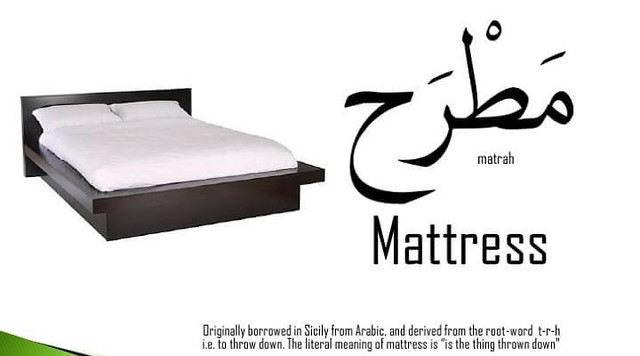 13-Jumper: جبّة jubba, is listed to as an external garment. In 1053 and 1101 the word was first seen In Western languages in southern Italy Latin as iuppa, which means a luxurious silk stuffed garment. In Middle of 12th-century Latin term juppum and later in 12th-century French word jupe meant a certain type of costly jacket garment.

In the 14th century English term was jioupe | joupe, in 15th-century it turned into iowpe | jowpe, in 17th-century the word spelled as jup, juppe, and jump, in 18th-century jupo and jump, and the word used at present jump and jumper evolved in the 19th century, all these words meant jacket.

4 steps to become fluent in Arabic

How To Prepare for TOEFL or IELTS for Arabic Speakers?