Pineapple is one of the only major sources of bromelain in our diet. In accordance to one study, pineapples can sometimes be useful in the treatment of sports-related injuries, mainly due to the anti-inflammatory properties that are found in bromelain. Bromelain is a proteolytic enzyme i.e. it is a mixture of enzymes that help in digestion of protein.

The anti-inflammatory properties also include the reduction of bruising and swelling. You can also consider this as a scavenger enzyme that helps in cleaning up the damaged cells. Bromelain seemingly works by triggering the production of substances in the body that reduce swelling and fight pain, and also contains some chemicals which prevent blood clots.

Several studies have shown that bromelain also has the potential to act as a cancer-fighting agent. It also works hand in hand with chemotherapy in order to suppress the growth of cancer cells. It also contains something known as beta carotene which protects the human body against colon cancer as well as prostate cancer.

Vitamin C that is found in pineapple juice can also, in fact, help one against heart disease. Several studies including one from China and one from Finland have shown that the higher the intake of Vitamin C can cause a substantial decrease in the potential risk of CHD or coronary heart disease. Also, much like cancer, the risk of heart disease is reduced with a diet that is high in fiber. 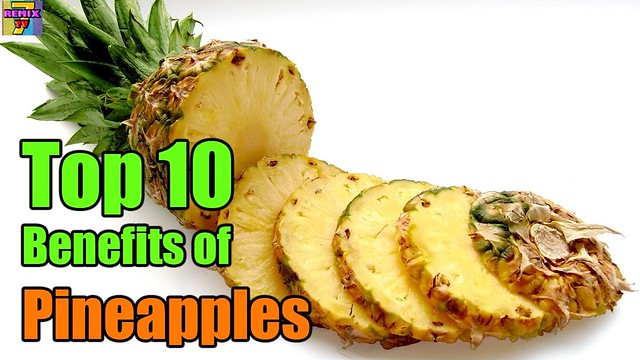 Vitamin C plays an essential role in the protection of vision. A recent study had also shown that the higher intake of vitamin C reduces the risk of cataracts, which is blurriness of the lens that may interfere with vision.

Pineapple juice contains various beneficial minerals and vitamins which include beta carotene, copper, zinc, folate, and vitamin C. several of these help in boosting the fertility of both women as well as men.

Pineapples are a potent source of the beta carotene, which is converted to Vitamin A during the digestion process. A number of studies have also found that beta carotene reduces the risk of asthma that is exercise-induced.

Due to the anti-inflammatory properties found in bromelain, several types of research suggest that pineapple could also be useful in the treatment of those affected by osteoarthritis.

Another huge benefit of consuming pineapple juice is the manganese content found in it. A large portion of the population is deficient in manganese. It is an essential and vital nutrient which fights disease as well as aging by protecting the cells in your body from the free radicals which might cause cellular damage.

Pineapple juice is thought to be essential for digestion and reduction of constipation and bloating. The bromelain comes into action here by breaking down the protein faster. Hence it speeds up digestion and prevents or reduces bloating or constipation in the process too.