There are around 3,000 types of dates in the world but Saudi Dates are known to be the best dates, it is one of the best fruit to eat. There are different types of dates available in the Saudi market such as Ajwa, safawi, khudri or amber dates and therefore, choosing one of them could be a difficult decision.

For the connoisseurs who might want to experience most of the Saudi Dates available, here are the 10 most sought-after types of dates with pictures.

According to a Hadith of Prophet Muhammad ﷺ, Ajwa khajoor has healing properties, and it is also said that those who consume 7 Ajwa dates in the morning will be safe from poison and magic until the evening.

Ajwa dates are also considered one of the most expensive dates in the world although they are not that expensive in Saudi Arabia. 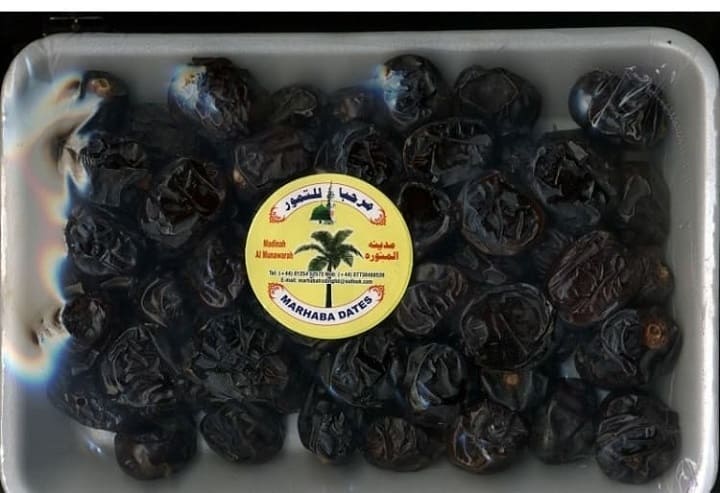 Amber is larger than other types of dates and is the favorite of many date lovers as they have a smaller seed and more fruit. These dates contain protein, are brown in color and one of the best dates to eat in the world.

If you are planning to get a premium gift for your loved ones back home, a pack of Ambar Dates could be a perfect choice.

Moreover, Ambar dates are considered one of the most expensive types of dates in the world although they are not that expensive in Saudi Arabia. 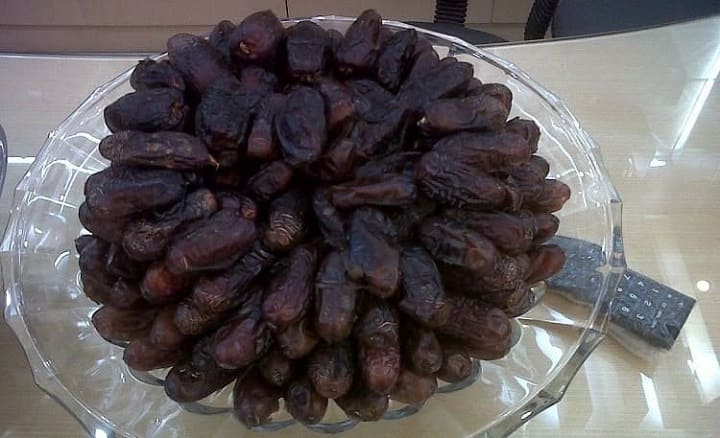 Safawi dates are usually black in color and packed with vitamins. This type of dates are normally cultivated in Madina and is of soft texture.

These types of dates also have healing properties attributed to them and therefore, they are considered one of the best dates to eat in the world. It is reported that if safawi dates are consumed on an empty stomach, they can kill any stomach worms present.

There are three classifications of dates; dry, semi-dry and soft, Safawi dates are of the semi-dry type. 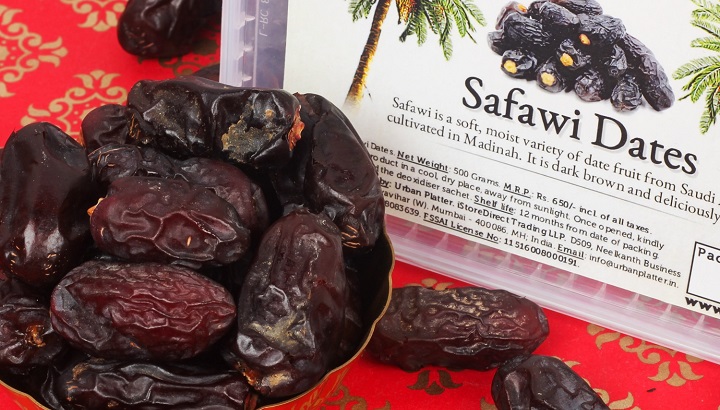 The name Barhi is derived from Arabic meaning “a hot wind”.  Barhi Date belongs to a different type of date group as it is known to be yellow in color and has a crunchy texture. When the fruit is ripe, it tastes like brown sugar or caramel.

Barhi Dates are one of those types of dates that are sold with the thin branches attached (see the picture below). Yellow Barhi dates are a rich source of fiber, iron, potassium, B-vitamins, flavonoids, and antioxidants.

Barhi dates are considered one of the most expensive types of dates in the world although they are not that expensive in Saudi Arabia. 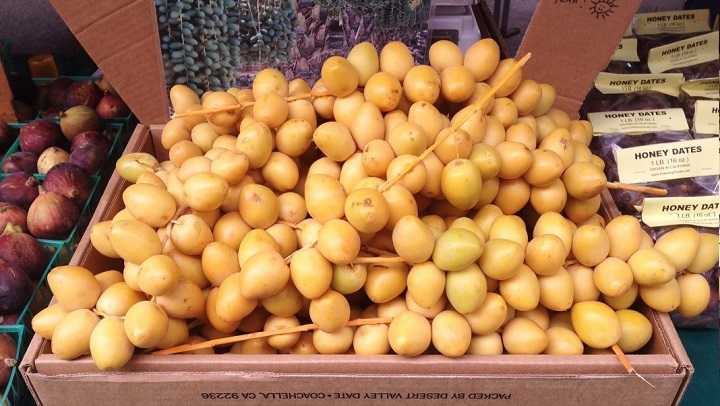 Saghai is one of the best dates to eat out of numerous types of dates cultivated in the Riyadh region. It also has a crisp texture which makes it a little crunchy to eat.

The Saghai dates are of light yellow to brown color. Although the texture may appear to be wrinkled, they never flake.

It is one of those types of Saudi dates that are mild in sweetness yet due to the combination of crisp and softness, they are one of the best dates to eat. 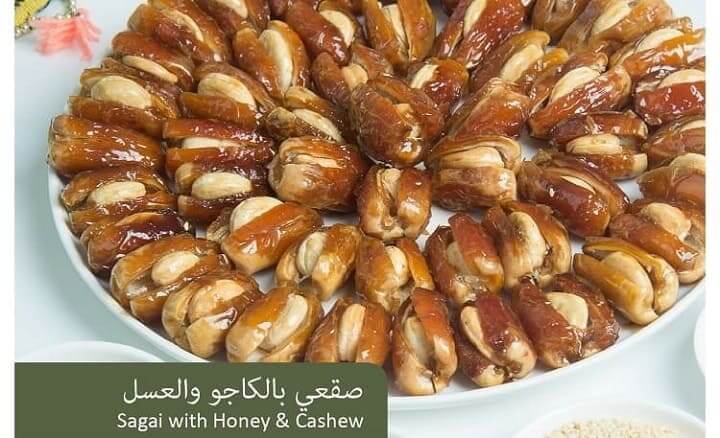 Khudri Date is of dark brown color and has a dry texture. Like all other dates, this type of date is also sweet. Despite the fact that it is one of the best dates to eat, diabetic patients avoid it owing to the high amount of sugar.

Khudri dates are one of the most exported types of dates due to the reasonable prices and their freshness (see picture below). This Saudi date is ideal if you want to feel energized and refreshed. 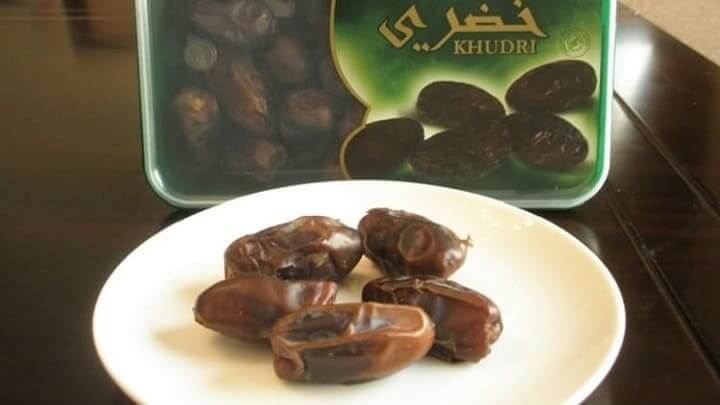 The name of Sukkari dates is derived from “Sukkur” which in Arabic means Sugar. As the name suggests, like many other types of dates they are very sweet to eat and people who like desserts treat Sukkari as one of the best dates to eat.

Sukkari date is cultivated in the Al Qaseem region. They are of crisp texture and sweet to taste. This type of dates is used to prevent tooth decay, lower cholesterol and get rid of any fatigue. 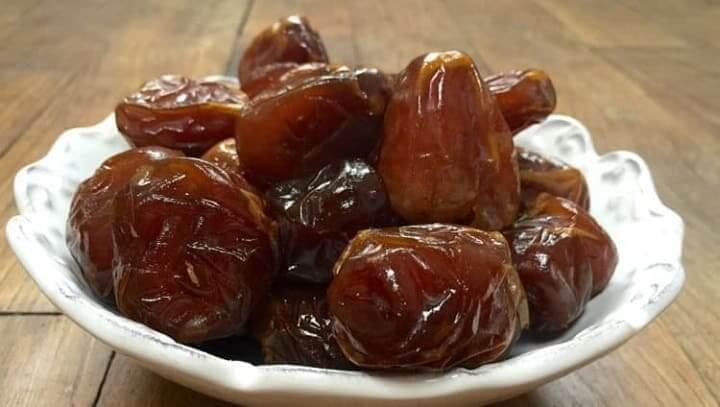 Zahidi Dates has a golden color and is of oval shape. The skin is thick and has a dry texture with high fiber content which makes it the best dates fruit. In contrast to Medjool dates which are high in sugar, Zahidi dates are one of those types which contain considerably low sugar content.

As you know there are many types of dates that are soft in texture but Zahidi dates are known as the “butter date” for both their light flavor and pale tan color (see picture below). 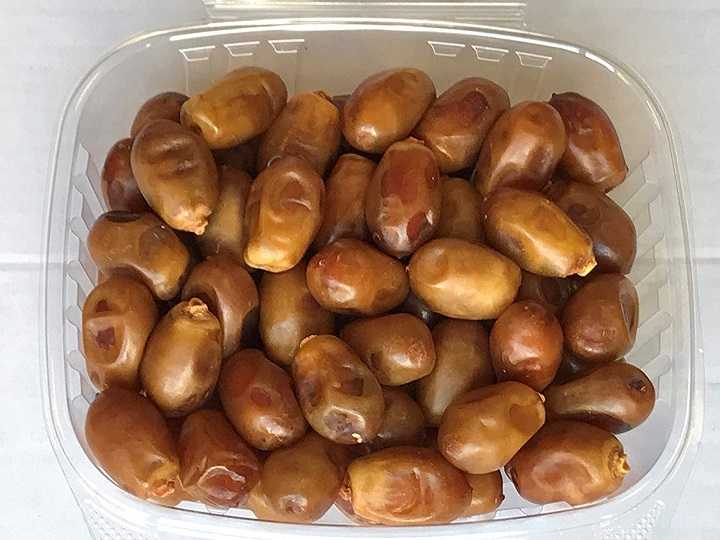 Medjool was known as the Queen of dates, they are large and have a strong flavor with a soft texture. It is one of those types of dates that are often used to make smoothies and can be served all year round.

Medjool dates are high in calcium and iron, one serving of dates also provides you with 20% of your daily dietary fiber. Considering the high level of sweetness in Medjool dates, diabetic patients try to avoid it nevertheless they are one of the best dates to eat.

Moreover, Medjool dates are considered one of the most expensive types of dates in the world although they are not that expensive in Saudi Arabia. 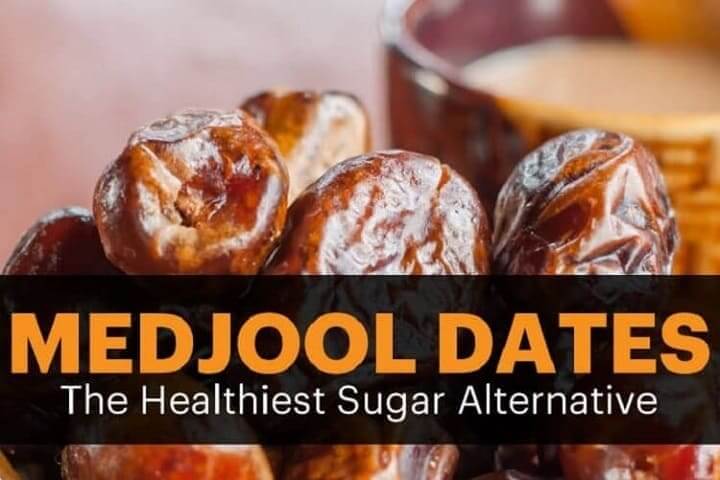 Kholas dates are considered one of the best varieties of dates produced in Saudi Arabia. This caramel-flavored date type is usually consumed with Arabic coffee and have a sticky texture.

Without a doubt, they are one of the best types of Saudi dates to eat with a cup of Arabic Coffee. This type originates from Al Kharj and Qaseem regions.

Where can we buy the best types of dates in KSA?

After reading about the types of dates available in Saudi Arabia you must be craving to eat some of them as Saudi dates are considered the best in the world.

If you want to buy any type of date in Saudi Arabia, the best place is the different markets of Madina. We have given the map location of some of the renowned markets where you can buy almost every type and quality of dates. 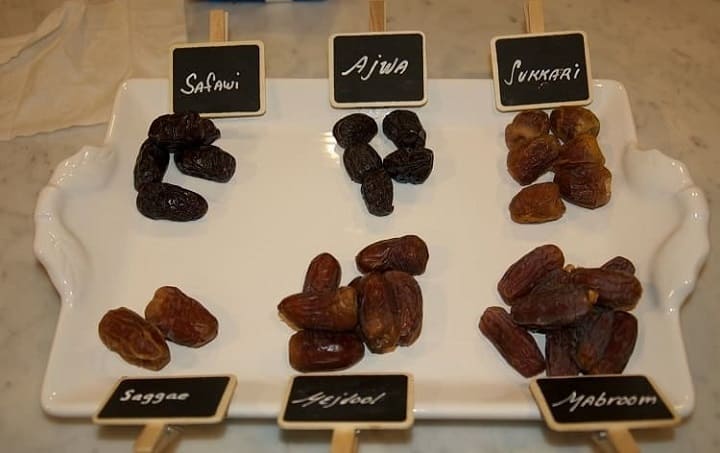 Although date shops are available all around Madina and you can buy from any of them. The Central Dates Market is situated near Masjid Ghamama in Madina and it is specialized for selling dates.

If you exit the Masjid al Nabawi from gate 5, you will find it within walking distance. It is a big market and you can find almost every type of date here at an affordable price.

If you want to buy dates cheaper than what is available in the shops around Masjid al Nabawi, you can go across King Faisal Road near Madina Parking Space and buy almost every type of dates available in Saudi Arabia from there. As they are a bit away from Madina, so their rates are cheaper.

Every Muslim who visit Madina come to Mount Uhud as it is one of the most frequently Ziyarat places in Madina. You can find almost every type of date we have mentioned above from the temporary shops available around the place.

Dates and the culture of Saudi Arabia

Dates are an integral part of the Saudi culture as it is part of their daily diet. You will find Saudis and generally Arabs eating dates on the following two occasions.

As we have already discussed different types of dates produced, consumed and sold in Saudi Arabia, now it is the time to know the countries which are well-known in producing dates. A total of 8.5 million tons of dates are produced in the world and here are the top 10 dates producing countries.

According to the Food and Agriculture organizing of the United Nations, Egypt is at the top of the countries that are producing dates. Egypt produces around 1.7 million tons of dates on an annual basis which makes around 20% of world production. The most common type of dates is Hayany and Zaghloul.

Iran comes at number 2 among the top dates producing countries with 1.1 million tons of annual production. Around 13% of dates consumed all around the world are produced by Iran. The most commonly produced dates in Iran are Mazafati dates.

Algeria produces 1 million tons of dates annually and stands on the third number after Iran. Thoory, Iteema, and Deglet Noor are mostly produced in Algeria. They have a production share of around 12% in the whole world.

After Saudi Arabia next comes the UAE among dates producing countries. UAE produces about 671,000 tons of dates. The most famous types of dates produced in the UAE are Dabbas, Lulu, and Khenaizi.

Iraq comes after UAE that produces around 615,000 tons of dates annually. Khastawi, Amir Hajj, and Dayri are mostly produced in Iraq.

Although the list of top dates producing countries is occupied by the Middle Eastern countries, Pakistan is the only South-Eastern country in the list with around 500,000 tons of production.

Sudan produces 439,000 tons of dates that include Bireir, Barkawi, and Abid Rahman.

Every year Oman produces 348,000 tons of dates. The most famous type of dates produced in Oman is “Fard”.

With 241,000 tons of dates production, Tunisia is the biggest exporter of dates. The most commonly produced dates type in Tunisia are Deglet Noor, Touzerzayet, Kenta, and Ftimi.