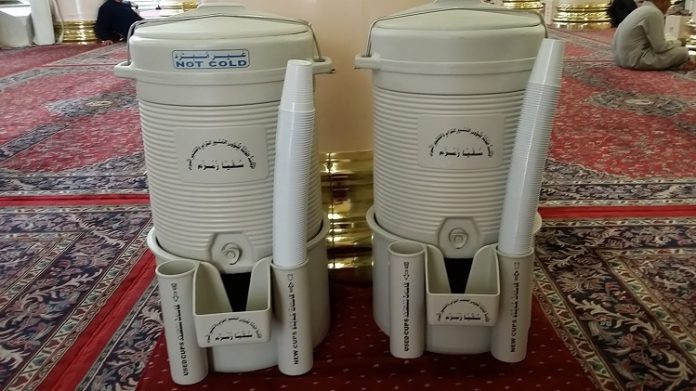 01- How was it founded? Prophet Ibrahim's son Ismail A.S was hungry and thirsty in the barren desert and so was crying. His mother looked for water desperately but could not find it anywhere. Ultimately, Allah discovered ZamZam well for Ismail A.S.

02- The names of the well: Some names commonly heard of the ZamZam would be Maimoona, Shabbaa’a and Murwiya.

03-Energy: Although ZamZam is just clear water, the benefits of drinking it are endless! As told by the German scientist Dr. Knut Pfeiffer, the energy in human cells increases rapidly after drinking ZamZam.

04-Clean and Healthy: ZamZam has been flowing continuously for the past 4000 years and after much research done, it is found that there are NO chemicals or impurities found in ZamZam. It’s always clean and healthy!

05-Pure: Evian along with several other mineral water companies that state to be pure have around 357mg whereas ZamZam contains 366 mg of bicarbonates and is said to be the cleanest and purest water in the whole world!

06-The Power of Healing: ZamZam is full of calcium and magnesium salts and natural fluids that can heal the most dangerous diseases, in this world.

07-Its origin: The rock on which Mecca is formed has closed pores and scientists have stated how reservoirs of freshwater flowing continuously can only be done on rocks that have open pores. See the miracle?

08-The actual science: Where all this water had come from remained a secret which no one ever knew until scientists started to dig up tunnels in Makkah were they found cracks and ruptures in the rocks that went straight in both the directions from which the water would be flowing out.

09-Drink it for any purpose: Drinking ZamZam for a specific intention or purpose fulfills it by the grace of Allah. It could be anything from healing an ill person or getting rid of scarcity or being patient and less hyper.

10-Fasting by ZamZam: Fasting by ZamZam is a religious routine for the Muslims that dates back to the time of the Holy Prophet S.A.W. Fasting with ZamZam improves hemoglobin levels, energy levels, detox the body and leaves it healthy and nourished.